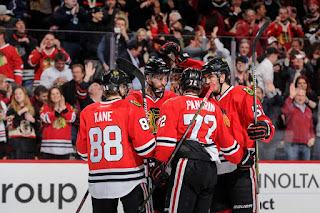 If there was a doubt that Artemi Panarin was the favorite for the Calder Trophy for the Rookie of The Year in the NHL, I think if the last two games didn't convince you, tonight should be enough for anyone to know that the Breadman is good!  Panarin added another 3 assists, the Hawks had 3 PPGs and 1 SHG, to help the Chicago Blackhawks coast to a 6-2 win over the Arizona Coyotes.

Richard Panik replaced the injured Marian Hossa on the top line and it took only 5:16 into the 1st period for him to take advantage of it as he found a loose puck in front of the net and snapped it past Coyotes goaltender, Louis Domingue.  The Hawks would then take 2 straight penalties, but while on the PK, Jonathan Toews scored a nice breakaway goal, to give the Hawks a 2-0 lead.  The Hawks took that lead into the locker room, with the Coyotes had a 7-6 SOG advantage. 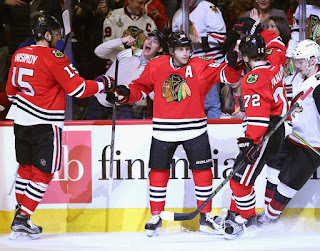 The Blackhawks started the 2nd by outshooting the Coyotes, 6-1.  In that time, on the power play, Patrick Kane roofed a shot over the shoulder of Domingue, with barely room to spare, to extend the Hawks lead to 3-0.  Antoine Vermette rammed Artem Anisimov into the boards, not on purpose, as Anisimov cut back towards Vermette.  Anisimov left the ice, as did Vermette after receiving a 5 minute major for Boarding, and a game misconduct.  On the ensuing power play, Andrew Ladd scored two goals to stretch the Hawks lead to 5-0 after two periods. 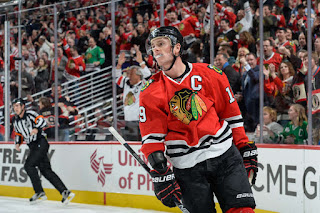 The 3rd period saw the Coyotes get on the board as Connor Murphy flipped a shot from the point that found its way past Scott Darling to make it, 5-1, Hawks.  it was short-lived, as the Hawks got that goal back :58 later, when Andrew Desjardins took a centering pass and deposited past Domingue for a 6-1 Blackhawks lead.  Brad Richardson would score to end the scoring and the game, 6-2.