Duncan Keith's Short Fuse Gets Him a Six-Game Suspension 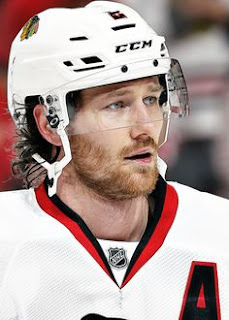 Chicago won't run on Duncan for the next six games.  The NHL came down on Duncan Keith today as he was handed a 6-game suspension for a high-sticking incident on Minnesota Wilds' Charlie Coyle.  This means that the reigning Conn Smythe Trophy Winner will miss the first game of the 2016 NHL Playoffs.

This is the third time that Keith finds himself suspended.  All three suspensions were retaliatory responses.  Oddly enough, none of the original infractions were called for penalties.  The first occurrence occurred in 2012 when Keith took a shoulder to the face from the Vancouver Canucks' Daniel Sedin and then shortly afterwards, elbowed Sedin in the head.  Keith received a five game suspension for that hit.  In the 2013 Western Conference Finals against the Los Angeles Kings, Keith took exception a Jeff Carter hit and gave him a high stick to the head.  He was suspended for one game for that incident.  In this latest incident, Keith was cross-checked and then "slewfooted" and dumped on his back before extending his stick and swinging it into Coyle's face.

Keith will forfeit $148,883.35 of his salary.  He has the right to appeal his suspension, but there are times where the appeal could last longer than the actual suspension lasts.  The Blackhawks will need him when he gets back for Game 2 of the 1st round of the playoffs.  He will be rested, the only good thing to come from this mess.  Lets hope that he plays his game and gets revenge on any cheap shot by retaliating with a goal instead of a costly, stupid penalty that can cost him and his team, a chance for Lord Stanley's Cup.