A goalie duel between Corey Crawford and Jake Allen lasted from the beginning till the end of 6 rounds of a shootout before the St. Louis Blues skated away with a 3-2 victory over the Chicago Blackhawks. 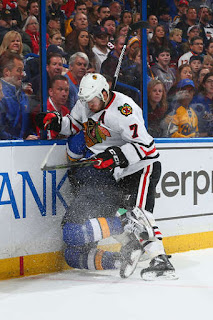 The 1st period saw a fast-paced game that had plenty of end-to-end action.  Late in the period, Blues enforcer, Ryan Reaves put a big hit on Blackhawks defenseman, Christian Ehrhoff, that resulted in a 5-minute major charging penalty and a game misconduct for Reaves.  The period ended with no score, but the intensity was building going into the 2nd.

Early in the 2nd, while still on the power play, the Hawks cashed in as Andrew Ladd redirected a slapshot by Teuvo Teravainen to give the Hawks an early 1-0 lead, 1:14 into the period.  Afterwards, Jonathan Toews was run into the boards by Jaden Schwartz.  Toews fell awkwardly into the door of the Blues bench and soon after, went to the Blackhawks dressing room.  He would return later.  David Backes, being his typical self, displayed his leadership skills with a cheap shot from behind on Dennis Rasmussen.  Brent Seabrook later gave a big hit to Jori Lehtera as the hitting picked up again.  The period belonged to Corey Crawford with 15 saves in the period, half of which, were prime scoring chances.  The period would end, 1-0, Blackhawks. 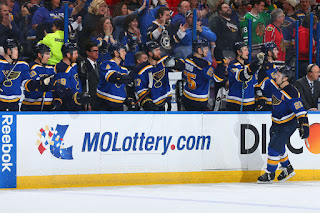 Half way through the 3rd period, Backes would get the Blues on the board as the Blackhawks were called, yet again, for Too Many Men On The Ice.  The 23rd ranked penalty kill in the league, could not kill the penalty and the game was tied at 1.  Nor could they stop the following power play, nearly 5 minutes later, when ex-Blackhawk, Troy Brouwer, slapped a one-timer past Crawford, to give the Blues a 2-1 lead, half way through the 3rd period.  With Crawford pulled, Toews found Artemi Panarin in the slot for a one-timer to tie the game at 2 with 1:13 remaining in regulation.

In overtime, Ladd had appeared to score, but it was ruled no goal as he made contact with Allen.  They went on to the shootout, where it went 6 rounds before Kevin Shattenkirk would beat Crawford, while Teravainen rang his shot off the post that gave the Blues the 3-2 win in a shootout.


Notable Mentions: In his first career shootout attempt, Panarin scored with ease on a deke move on Allen.  Unfortunately, Teravainen's first career shootout attempt, rang off the post.  The Blackhawks were on the verge of losing a game after they lead after two periods for the first time since the 2013-2014 season.  That record stays intact thanks to Panarin's tying goal late in the game.

Previous meetings between the clubs: