Blackhawks Get Rocked By The Hurricanes, 5-0 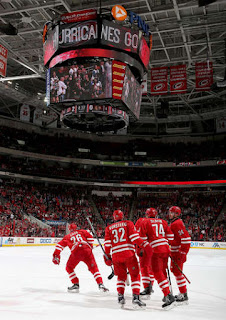 The Chicago Blackhawks entered tonight's game playing their 14th game in 24 nights.  Their last game before the All Star Break was in Carolina as they took on the Hurricanes, 6-2-1 in their last 9 games, were ready to play tonight.  They dominated every facet of the game as they easily handled the Blackhawks 5-0

Carolina jumped on the Blackhawks early as Jeff Skinner grabbed a rebound shot off of Corey Crawford and flipped it into the back of the net just 2:12 into the game to give the Hurricanes a 1-0 lead.  Riley Nash made it 2-0 later in the period as he deflected a Jaccob Slavin shot that made its way past Crawford.  The first period would end with John-Michael Liles joining a 2-on-1 rush and depositing it into the back of the net for a 3-0 Hurricane lead.  The Blackhawks were outshot 16-5 in the period.

Scott Darling replaced Crawford to start the 2nd period.  It didn't help motivate the Blackhawks as the Hurricanes tallied half way through the period when ex-Blackhawk, Joakim Nordstrom snapped a shot past Darling to extend the lead to 4-0.  Less than 2 minutes later, Nash would pick up his 2nd goal of the night, to put the 'Canes up by 5 at the end of 40 minutes.

The 3rd period was just formalities.  There was no scoring.  Joel Quenneville couldn't have been happy with the effort his team put forth tonight, but then again, they are atop of the Western Conference.

Notable mentions:  The Blackhawks head into the All Star Break leading the Western conference with 70 points.  Patrick Kane strides into the break leading the league with 73 points, 15 points ahead of the closest competitor, Jamie Benn of the Dallas Stars.  Let's hope the boys get some much needed rest, and come back for the remainder of the season strong.  The Blackhawks were miserable at the face off dot winning only 20 of 62 faceoffs.