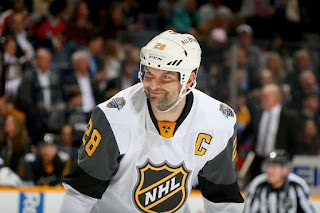 John Scott became the new face off the NHL at All-Star Weekend in Nashville.  The fans spoke and voted him in as not only an NHL All Star, not only the top voted player in the Pacific Division, giving him Captain's honors for the Pacific Team, but the MVP of the 2016 NHL All Star Game.

A Cinderella story out of nowhere, his talent shows he wasn't supposed to be there.  His NHL career spans 7 teams (Wild, Blackhawks, Rangers, Sabres, Sharks, Coyotes, Canadiens) in 8 years.  In that time, he has played 285 games with 5 goals and 6 assists, and 542 penalty minutes.  He scored 2 goals tonight in the upset game against the Central Division to get to the Championship game. 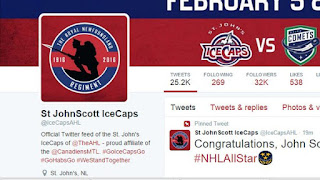 He originally did not want to participate.  He knew he didn't belong there.  Then the oddity of him being traded from Arizona (who was in the Pacific Division in which he was captain for), ad traded to the Montreal Canadiens, who quickly demoted him to their AHL affiliate, St. John's IceCaps.  The IceCaps even went as far as changing their name for the night in honor of John Scott's historic weekend performance.

Then, through an interview, Scott talked about an NHL Official asking if his family would be proud of him being there.  That made Scott change his mind to go to Nashville.  He may not belong, but no one questions family.  From then on out, Scott would go to Nashville, and the enforcer would take Smashville by storm. 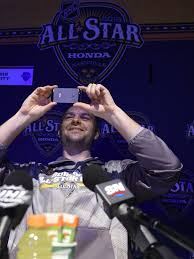 Scott arrived in Nashville and was blown away by the attention he received.  He even stopped to take a picture of the media interviewing them because he wanted to soak it all in.

His role has always been the enforcer.  But as everyone got to know him off the ice, he is one of the kindest, "Gentle Giants" you would want to meet.  Everyone on his previous teams know it, and now the rest of the NHL knows it as well.  He did manage to get into an "altercation" with an ex-teammate, Patrick Kane.

It was a feel good story the entire weekend.  Every player stated so.  Even those that did not make it to the game, like Henrik Lundgvist, got caught up in the excitement.

Henrik Lundqvist ‏@HLundqvist30  2h2 hours ago
Love it!!!!! Have not smiled this much in a long time watching a hockey game.. #JohnScott #MVP #NHLAllstar

Ex-Blackhawk teammates chimed in with their thoughts as well:
Andrew Shaw ‏@shawz15er  2h 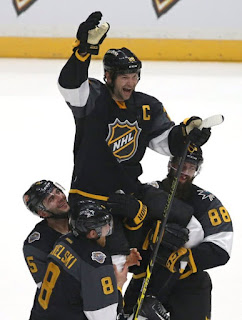 Johnny "Cash" Scott, "Walked The Line" this weekend, not knowing how the weekend would turn out, and he walked out as the "Man In Black" while being carried off on the shoulders of the winning team of the 2016 NHL All-Star Game.