The Chicago Blackhawks entered tonight's game trying to break a 2-game losing streak against the Columbus Blue Jackets, who come into the United Center starting the season 0-5.

The first period saw the Blackhawks take two penalties to the 3rd best power play in the NHL.  They were able to kill both penalties although this is a continuing problem that needs to stop.  Their scoring troubles need to also stop as it continued to be non-existent as they failed on at least three occasions to do the simple thing, shoot the puck at the net and see what happens.  They managed a feeble 6 shots to the Jackets' 9 and only 1 scoring chance.  That is NOT going to get it done. 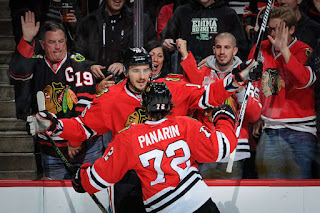 The second period saw three power plays for the Blackhawks.  Not much came from the first two.  The Hawks finally got on the board when Artemi Panarin patiently waited and fed a pass to Artem Anisimov who back-handed a shot past McElhinney.  Sixty-five seconds later, on the Hawks' 3rd power play of the period, Teuvo Teravainen put a centering pass in front of the net that bounced off Columbus' defenseman, Dalton Prout, and found the back of the net to give the Hawks a 2-0 lead, heading into the second intermission.  The Hawks limited Columbus to just 3 shots in the period.

In the third period, Columbus' frustration started to show as Andrew Shaw's accidental high stick was not called, but a retaliatory cross-check and unsportsmanlike conduct penalty put Columbus short-handed two men.  Marian Hossa made them pay with a sizzling wrist shot for his first goal of the season, putting the Hawks up 3-0.   Jack Johnson finally found a way to get a puck past Crawford as he threw one at the net that had eyes.  Then, Patrick Kane with an open net, received a pass from Panarin, and reluctantly scored  the empty-netter.  He wanted to give the pass back to Panarin.

Notable mentions: Vincent Hinostroza, a Bartlett, IL native, made his NHL debut tonight in front of friends and family.  He played just under 10 minutes and was noticeably present when he was on the ice.  he had a solid game.  Hidden throughout the game, was the play of Corey Crawford.  the game was closer than the score tells.  He made some great saves to keep the game either scoreless or close.