The 'Bulin Wall Calls it Quits 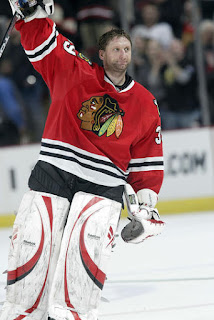 Ex- Chicago Blackhawk, Nikolai Khabibulin declared his retirement from the NHL where he played 18 years.

Khabibulin, a 4-Time NHL All-Star ends his career with 333 career wins, good for 21st on the All-Time list.  He falls 2nd behind Evgeni Nabokov (353 wins) for most wins as a Russian goalie.

"The Bulin Wall" as he was referred to, started his career with the Winnipeg Jets/Arizona Coyotes back in 1994.  He spent 5 years there where he racked up three 30+ win seasons in a row.

He spent the next 4 years with the Tampa Bay Lightning, where in his last year, won his only Stanley Cup as they defeated the Calgary Flames in 7 games.

The Blackhawks then signed him for the following 4 years.  He ranks 9th on the All-Time Blackhawks list for wins (91) and goals against average (2.84) and 5th for save percentage (.902).

He went on to play with a bad Edmonton Oilers team where he accumulated the worst numbers with a team for his career, 33 wins, 67 losses, 3.00 GAA.

He made a brief return to the Blackhawks in the 2013-14 season, but only appeared in 4 games.

He did not play in the NHL at all last year.

Khabibulin captured 2 Olympic medals, Gold in 1992 as part of the Unified Team in the Winter Games in Albertville, and Bronze in 2002 as part of Team Russia in Salt Lake City.

Khabibulin is looking into managing in the KHL.

From all Blackhawk fans, "THANK YOU KHABI!!!"