The road has not been nice for the Chicago Blackhawks this year.  Losers of the last four road games, they come into New Jersey where they have won their last five against the Devils.  The Devils helped the Hawks keep one of those streaks alive as they beat the Hawks, 4-2 in the Prudential Center. 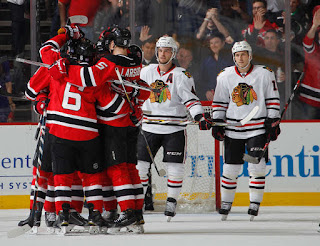 The Devils found the score sheet first, when Lee Stempniak capitalized on a Niklas Hjalmarsson turnover and slipped it past Corey Crawford, just three minutes into the game.  The Hawks managed 8 shots on goal, but did not really test Devils goaltender, Corey Schneider.  The Hawks continued their horrible play of not finishing strong at the end of periods.  Kyle Palmieri game New Jersey a cushion when he took a loose puck right off a faceoff and beat Crawford, stick side to make it 2-0, with just over 2 minutes left in the period.  Shortly afterwards, Jonathan Toews showed his frustration by scrapping with Adam Henrique and winning the fight.  Unfortunately, it did nothing to get the rest of the team motivated.  26 seconds after their last goal, the Devils extended their lead to 3-0 when Travis Zajac picked up a rebound and buried it past Crawford. 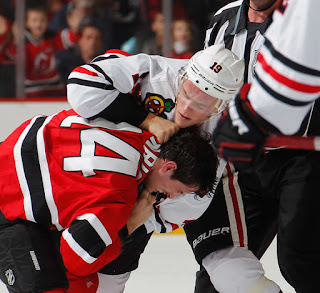 The 2nd period came with Scott Darling replacing Crawford in goal.  Artem Anisimov left half way through the period which later was to be a lower-body injury. Quenneville mentioned after the game that he is day-to-day.  The Devils added to their lead when Mike Cammalleri took a cross ice pass and deposited it behind Darling to make it 4-0.  The Hawks finally get on the board late in the period (now a strong finish to a period) when Patrick Kane found the back of the net with a wrist shot from the far slot with a minute left in the period to make it 4-1.

In the 3rd, the Hawks outshot the Devils 14-5, but Schneider was strong.  Joel Quenneville pulled Darling with 6:42 left in the period to try and find a way to get things rolling.  It wasn't until there was 1:26 left that rookie, Tanner Kero scored his first career NHL goal with a nice backhand that found the back of the net.

Notable mentions: After allowing just two goals in the first three games without Duncan Keith, the Blackhawks have given up 20 goals in their last five games.  Going further, the Hawks gave up 8 straight goals going back to when they led St. Louis 5-2 before losing in overtime, 6-5 on Wednesday.  Then tonight, New Jersey jumped out to a 4-0 lead.  It is possible that the Hawks may see the return of Marian Hossa on Sunday when they play Edmonton at home.  Hossa has missed the last three games.