The Chicago Blackhawks started their pre-season Tuesday night against the Detroit Red Wings at the United Center.  The Blackhawks jumped out to 3-0 and 4-1 leads, before allowing Detroit to come back to tie the game late in regulation.  But in the new 3-on-3 overtime format, Trevor Daley deposited the game-winning puck into an open net to finish a 3 on 1 chance with a nice pass from Patrick Kane to give the Blackhawks a 5-4 win in overtime.

Kyle Baun opened the scoring just over seven minutes into the first period as he knocked down a fluttering puck in front of the net to give the Hawks a 1-0 lead.  Just over a minute later, Jonathan Toews' wrister from the slot whistled past Detroit goaltender, Jimmy Howard and giving the Hawks a 2-0 lead to end the first.  Six minutes into the 2nd period, Teuvo Teravainen gave the Hawks a 3-0 lead with a wrist shot on the power play that went through the legs of Howard. 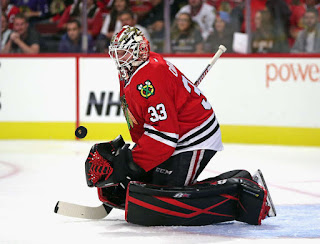 Scott Darling picked up where he left off last year by being a stone wall as he stopped all 22 shots he faced.  Darling was on his game and played up to the 10 minute mark of the 2nd period where he was relieved by Mark Visentin.  Being pre-season, both teams switched their goalies at the half-way point in the game.  Detroit got on the board with 5 minutes left in the 2nd period by a goal from Anthony Mantha who was left alone in the slot to cut the lead to 3-1.

In the third, Ryan Garbutt put the Hawks up 4-1 early in the period on a nice individual effort on a turnover.  From there, Detroit scored 3 goals, including the game-tying goal with 2:05 left in regulation on the power play to send the game to overtime.  Daley then finished the game 1:40 into the extra session.

Noteable mentions:  Jan Hejda played 21+ minutes, was a +2, and had an assist.  Daley and Garbutt, both, had a goal and an assist in their debuts in the Indianhead sweater.  Center, Dennis Rasmussen, had a strong game and won 60% of his faceoffs while leading all Blackhawks with 2:43 of short-handed time on the ice.