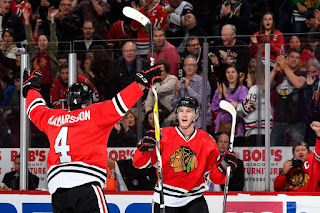 A classic Original Six matchup at the United Center brought the Eastern Conference leading Montreal Canadiens (13-1-1) and Andrew Shaw against the Western Conference leading Chicago Blackhawks (10-3-2).  Although Shaw was a presence all night (6 shots, 9 hits), it was a highlight reel goal from Patrick Kane that was the deciding goal in a 3-2 win.

Gustav Forsling got the scoring started with his first career NHL goal on a slapshot from the point that had eyes as it made its way past Canadiens goalie, Al Montoya.

It stayed that way till the 2nd, when Montreal scored two quick goals to start the period.  Shea Weber with a toss pass to the net, deflected off of Michal Kempny's stick and over Crawford's shoulder.  Then, Andrei Markov unloaded a high shot from the slot that sailed over Crawford for a 2-1 Canadien lead. 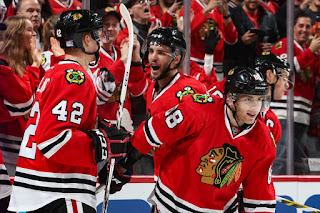 Half way through the 2nd, it was Marian Hossa picking up a dirty rebound and slamming it past Montoya to tie the game.  Five minutes later, Kane performed a deke around two Candiens.  Then while getting pushed down, he flipped the puck over the left shoulder of Montoya for a goal that is worthy of Goal Of The Year.  It proved to be the game-winner although controversy went with it.  Prior to the goal, a shot deflected off the netting, but play continued .  Kane scored shortly afterwards.  Coach Joel Quenneville on Kane's goal: "That had the wow factor all over it." 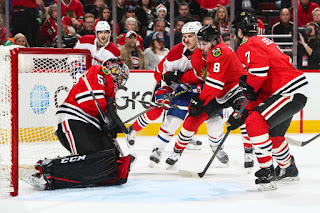 Crawford made 21 saves and had another stellar night of point blank stops.  Hossa, when asked about Crawford's play:  "This is the best I've seen him play. He's had really great years before, but right now he's at a different level."

Notable mentions: The Blackhawks blocked 22 shots tonight.  Brent Seabrook and Niklas Hjalmarsson, both, stopped 5 shots each.  The win continues the Hawks' consecutive point streak to 11 games (9-0-2, 20 pts).  Jonathan Toews has 10 pts (4G 6A) in his last 9 games.  The Blackhawks hit the road for a 7-game road trip after tonight.